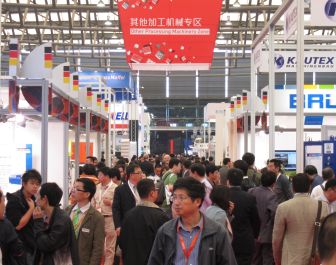 CHINAPLAS 2012 concluded on April 21 at Shanghai New International Expo Centre, China, creating new records in exhibition area and numbers of exhibitors and visitors. Ranked as Asia’s No.1 and the world’s No.2 plastics and rubber show, CHINAPLAS 2012 expanded to 210,000sq m, an increase of 16.67% from 2011 and a 40% increase in comparison with the edition held two years ago in Shanghai. In terms of visitors, there was a breakthrough of 5-digit number to 109,858 with growth rates of 16.77% and 34.9% versus 2011 and 2010 respectively.

“CHINAPLAS has enjoyed the benefits from the continuous economic recovery since last year especially in Asia. The show’s growing reputation together with the strengthening economy in the Asian region boosted confidence of our exhibitors, leading to an upsurge in the number of exhibitors and exhibition scale,” said Stanley Chu, Chairman of Adsale Exhibition Services Ltd, organizer of CHINAPLAS. “Thanks to the global trend of green manufacturing and China’s 12th Five-year plan, we together with the exhibitors bring in many new development, new technology and new materials which feature low carbon emission, eco-friendliness, energy saving, etc.”

He added, “The strong reputation of CHINAPLAS, the well-mixture of Chinese and overseas exhibitors, the latest market updates for different application sectors, together with a diversified range of exhibits have attracted visitors from different parts of the world, achieving a double-digit increase in the number of visitors. More importantly, the ever-increasing number of overseas visitors has upgraded CHINAPLAS to a higher international level.”

It is worth mentioning that two new pavilions from Korea and Thailand joined CHINAPLAS this year, boosting the number of pavilions to 13 and breaking last year’s record. The rest of the pavilions came from Austria, Canada, France, Germany, Italy, Japan, PR China, Taiwan, Turkey, UK and USA. The prominent presence of these pavilions strongly proved the rising status of CHINAPLAS in the international arena.

To demonstrate the theme of “The Future is in Plastics and Rubber”, the “Future Zone”, comprising “Future Car” and “Premium Design Gallery”, succeeded in capturing the attention of all participants. The “Batshark”, champion of the “Future Car” design competition operated under the “Nurturing Our Future” program, was unveiled at the opening day. Specially created by a group of students from the East China University of Science and Technology, the “Batshark” features a smart operation system and lightweight and green technology, revealing a forward-looking future in the plastics and rubber industries.

Another part of the “Future Zone” was the “Premium Design Gallery”, which showcased a series of new, innovative and unique design of various plastic-made end products. Highlighted exhibits included a “Tree of Life” which is made of polycarbonate film; a Solar Impulse aircraft model which uses solar energy as the power source; chairs which possess delicateness, high mobility and various designs on shapes; three cutlery items that can be joined to form a small yet stable free-standing sculpture.

CHINAPLAS’ rising reputation was also confirmed by the extensive affirmative recognition from exhibitors who achieved a fruitful result during the 4-day show.

“We have exhibited at CHINAPLAS for more than 10 years. UBE participated in many important plastics trade fairs like K, NPE and IPF, and CHINAPLAS is also one of them. Here in CHINAPLAS we can build relationship with old clients and find new customers in Asia. The buyers we are looking for are from the packaging, auto and fishing industries. We receive good response and gain some potential prospects from these areas,” said Tokuhiro Sakida, Manager, Investor Relations & Public Relations Department of UBE Industries Ltd.

The success of CHINAPLAS was also reflected by remarks from buyers at the fair. Robert Jonsson, Key Segment Leader of Polymers of Algol Chemicals AB, stated, “It is a good experience to meet new suppliers all over the world. Besides the big name ones, I can also meet those less famous ones and share contacts with them for future cooperation. I found what I want here and I am very impressed with the Bioplastics zone, where I can find the latest technology of green products.”

The brilliant results achieved in 2012 provide CHINAPLAS a solid foundation in gaining more overseas visitors and exhibitors and reaching another climax in the coming future. The organizer announced that CHINAPLAS 2013, with an expected exhibition area of 220,000sq m, will be staged at China Import & Export Fair Pazhou Complex, Guangzhou, China, from May 20-23 next year.

The agreement between the two trade associations came into effect on June 1, 2014