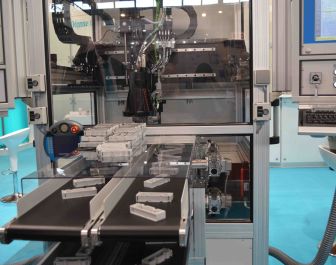 Due to the optionally equipped automatic part recognition in the dispensing cell, the fully automatic sealing process with Sonderhoff foam gasket and potting products is also possible in the case of a chaotic parts feed. Manufacturers can save on investment costs for parts’ holding fixtures on the mixing and dosing system and save themselves long installation times.

With high performance optics permanently installed in the dispensing cell, the intelligent image recognition system verifies the arbitrary position of the components on the transfer conveyor and automatically recognizes the different component sizes and shapes. In order to capture the image data, the conveyor belt stops for a short period of time and sends the component-specific image data to the three-axis linear robot control. The dosing contour program for the different component shapes to be processed is adjusted accordingly and the contouring control of the three-axis linear robot is corrected in such a way that the foaming or potting is always carried out precisely at the right place on the component.

The three-axis linear robot can scan components with a traversing range of up to 500x500mm (width x depth) and up to a parts height of 200 mm at the most, Sonderhoff notes. In doing so, the mixing head of the Smart dispensing cell is positioned with a repeat accuracy of +/-0.05mm above the component so that the sealing material can be precisely applied directly onto the component or in a groove by the mixing head dosing nozzle. A maximum acceleration of 5m/s² in component radii is possible with the Sonderhoff linear robot.

The material used for a polyurethane (PU) or silicone based foam gasket or potting from the Sonderhoff Chemicals product range is processed by the dispensing cell Smart with high quality, stable material consistency and constant seal dimensions, says the company. Smart – DM 402 can be equipped with the mixing heads MK 600, MK 625 or MK 650 for micro-seals of up to 2mm. The discharge performance of the mixing head is between 0.05 and 100g/s. The system can process viscosities of the sealing material between 300 and 2 million mPas without problems and the mixing ratio can be set continuously from 100:1 to 1:100.

Due to its compact design and small size, with overall dimension of 1200x1200x2300cm, Smart – DM 402 can be easily integrated into existing production concepts. In one of the models equipped with the mixing head MK 650, very small foam gaskets, so-called micro-seals, can be applied with a discharge performance of up to 0.1g/s. In the case of the potting of electronics components micro-potting with a discharge amount even as low as 0.05g/s can be realized, according to Sonderhoff.

A high variety and constantly changing component sizes are no problem for Smart – DM 402 with its optical component recognition, which is important to the frequently changing business environment, notes the company.

OYSTAR repositions itself in North America

Author plasticsinfomart 191
Trillions of barely visible pieces of plastic are floating in the world’s oceans, from surface waters to the deep seas. These particles, known as microplastics, typically form...
Read More

Author Plastics Infomart 371
SABIC, a global leader in the chemical industry, has announced that the newly formed Hygiene & Healthcare segment of its Petrochemicals business will showcase...
Read More